Here is what happened, and what is going to happen next

Ok, so let’s not count our chickens and celebrate too much…we still have some substantial hurdles to cross, but tonight there is reason to be optimistic, so let’s take a moment to just enjoy the victory so we can breathe, rest our frayed nerves, and be ready for the battles to come.

We had a convoluted, contradictory motion from the Government about avoiding a ‘no deal’ Brexit, an amendment to make this more definitive that was nearly pulled but then wasn’t, and an amendment for a ‘managed no deal’ that was also voted on.  Here is how events unfolded:

Despite Caroline Spelman attempting to withdraw her amendment (that Parliament does not want a no deal Brexit, ever), it was moved by co-signatory Yvette Cooper.  It was voted through by 312 votes to 308, to great cheers in the House.

The ‘Malthouse Compromise’ was then resoundingly rejected by 374 votes to 164.  Good – this would never have carried through in EU negotiations anyway!

Then things became truly bizarre!  The government’s motion, which was presented as a free vote by Theresa May, now had to be voted on as amended by amendment A.  At this point, the government did another one of its famous U-turns, imposing a last-minute 3-line Whip to vote against its own motion!  Despite this, 17 Ministers abstained (4 senior Ministers) and 1 Minister voted against the Whip and resigned; the motion passed by an even bigger majority than the amendment that had passed earlier!  It passed by 321 to 278 votes.

Theresa May then made her statement, in which she reiterated that the legal default is that the UK will leave the EU without a deal, unless something else is agreed.  She stated that Parliament needs to decide what it wants and said the options are:

She then said that, as she had previously committed to, the House would next get a vote on whether to request an extension to Article 50. She said that if the house agreed on a deal over the next few days, she could then ask for a short, limited extension to pass the necessary legislation. She then stressed that a short extension is unlikely to be granted unless there is an agreed deal, and that therefore if Parliament doesn’t support the deal and doesn’t support leaving without a deal, this is likely to result in a much longer extension, and that this would require the UK to participate in the EU elections in May.

There followed numerous points of order, with a strong level of anger and frustration coming across from MPs, a number of whom asked the Speaker, John Bercow, what steps they can now take to ensure that the necessary changes are made to the law to prevent an automatic no deal Brexit on 29th March.  Bercow gave a number of interesting responses that indicate (my interpretation) that there are ways for Parliament to take control of proceedings, out of the Government’s hands, if they talk to each other cross-party and seek professional advice on what they can do.  Many MPs mentioned that we’re now facing a constitutional crisis.

MPs also insisted on John Bercow reading out the text of the Government’s motion for tomorrow, which further angered the House as it was generally interpreted as being another attempt to back Parliament into a corner and force it to accept the Withdrawal Agreement as the only means to get an Article 50 extension and avoid a no deal Brexit. 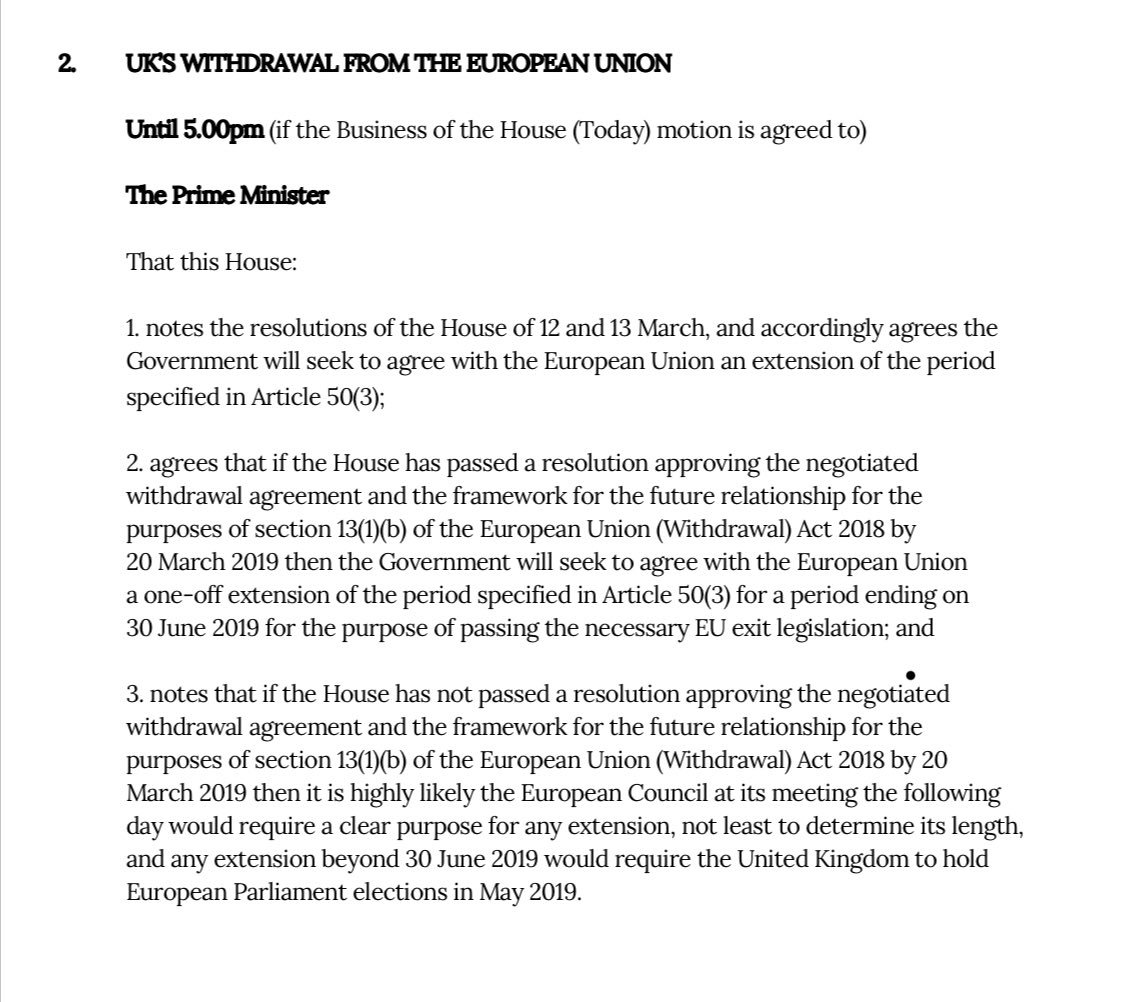 The motion is, of course, amendable!

There are likely to be a number of interesting amendments being tabled tonight and until 10.30am tomorrow (any tabled after tonight but before 10.30am will still be considered by the Speaker, but may not appear on the order paper).

Very frustratingly, Caroline Flint has teamed up with the ERG to prevent a further referendum.  I am horrified that an MP who campaigned to remain is now teaming up with the ERG!

Also, Farage is trying to make backroom deals with leaders from EU countries to veto any request for an extension.  As one member of our group, said earlier, it is rather ironic that Farage is seeking to undermine the sovereignty of British Parliament by getting EU countries on board to prevent us from running our country in the way that Parliament sees fit.

Much of the frustration, and many of the questions, in Parliament tonight revolved around the necessary mechanisms to go beyond the expression of Parliament’s will not to have a ‘no deal’ Brexit and take that possibility out of the current default legal position (given that the government has given no indication that it intends to put any such actions onto the Parliamentary timetable, despite the clear and strong will of Parliament having been expressed!).

The possible silver lining, as I see it

We are approaching a point where a People’s Vote may not be possible, but a revocation of Article 50 may!  Bear with me…
Tomorrow, Parliament is likely to vote for some version of the motion on extending Article 50.

Theresa May will then have to ask for such an extension, but without agreement on a deal (she is likely to attempt to table a 3rd ‘meaningful vote’ to try and ram it through, but it’s unclear whether John Bercow would allow it as it would be unchanged from the one that’s already been voted on and he’s previously confirmed that Parliament can’t vote on exactly the same motion twice), she’s not likely to get one.

The ERG and Flint may or may not be successful with their direct attempt to block a referendum, but it’s still unclear whether there is a majority in the House to support any motions or amendments for a People’s Vote. Without something like a People’s Vote (or, heaven help us, a General Election), it’s very unlikely we’d get a longer extension.

So, we could end up at the very last minute, without an agreed deal, but with Parliament having taken firm steps to prevent a ‘no deal’ Brexit, and no extension.  At that point, what option remains other than revoking Article 50?  It would likely be dressed up as temporary, with a plan to re-trigger it at a later date, but meanwhile, Brexit would be off the table!  It’s a long shot at the moment, I know, but actually it’s a bit shorter than it was just a few hours ago (in my opinion)!

Here’s hoping – and we MUST keep campaigning, keep lobbying MPs, keep turning up at protests, and more than ever it’s going to be crucial that as many of us as possible go to the big march on 23rd March in London!

Coaches are available from Sheffield, and there is some funding for train tickets.